Only Expert Media Buyers Know THIS About Facebook Ads…

Find out what separates amateur/beginner media buyers from the experts. There are several things that make an expert media buyer. Remember we’re all a work in progress though, right? 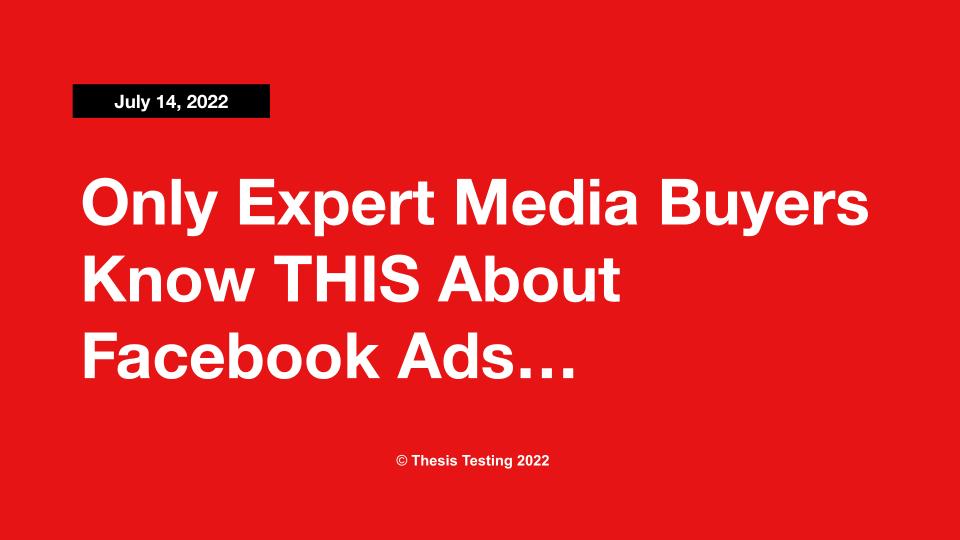 Have you heard of the breakdown effect?

The breakdown effect is when Facebook seemingly shifts budget to an “underperforming ad set or ad”. But what’s actually happening is the Facebook algorithm recognizes that if more budget was poured into the “better performing ad” the performance would rapidly deteriorate. This ad is “low hanging fruit”.

Ultimately Facebook is going to direct spend to what is more scalable. Ads and ads sets can get the best results over time and with the most spend.

The caveat is that the breakdown effect is only super applicable for brands that are starting to scale. If you’re operating at minimum budgets (under $20K per month), then getting the minimal ad costs a lower spend is probably what you’re going to go after and optimize for.

No matter your brand, pay attention to where Facebook is pushing your spend. Especially if you are seeing Facebook push your ad dollars towards “under performing ads”.

It’s probably because it’s a top performer. But if you don’t have enough spend to see it scale, it’s going to look like Facebook isn’t a good fit for your brand.

In that case, take a look at the patterns from what gets the most spend, and see how you can improve on it.

A great example of the breakdown effect is from Cody, who heads up eCommerce at Jones Road Beauty. Cody posted this question on Twitter and it started a great conversation, so let’s dissect this.

I actually responded to this post and this was my answer:

This would play out in an ad account as follows: Ad A and Ad B are both in the same ad set. Ad A gets more spend and more purchases, but Ad B gets a higher ROAS and a lower CPA.

It’s a great question because it separates new/inexperienced media buyers from experts who know how to scale. In the case of Cody’s example, if you put more money into Ad B… the results (ROAS, CPA) would ultimately be worse than Ad A.

For years, Facebook/Meta pushed the idea of the Power5, which was their best practices approach to Facebook Ads. But is the Power5 still relevant in 2022 in a post iOS14 world?

Are you considering advertising on Facebook? Or have you been using this platform for a while? Either way, you could be making these common mistakes when creating your Facebook ads.