We wanted to establish some basic hook rate benchmarks for our own internal consumption and we thought these might be useful as a point of reference for the broader ecosystem. 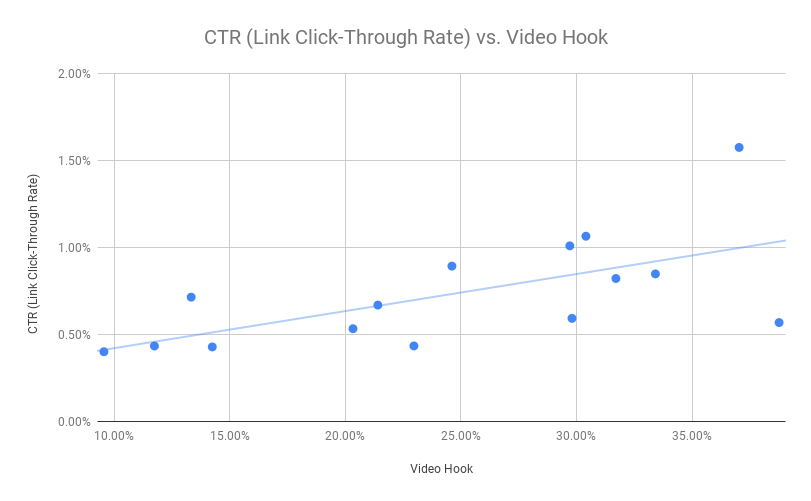 One of the key metrics we use internally when reviewing creative performance for video ads is the Hook Rate (I’ve also seen this referred to as a Thumb Stop Rate). Hook Rate is calculated as 3-second video views divided by impressions. It’s a basic metric, but it helps us see quickly which ads are grabbing users’ attention.

High hook rates are usually correlated with stronger overall performance. For that reason, we generally focus our creative iterations on creatives that already have strong hook rates. For example, if an ad has a strong hook rate but a poor conversion rate conversion so we might try changing how the offer is articulated in that creative while keeping the hook (the 3 seconds of the video) constant.

We wanted to establish some basic hook rate benchmarks for our own internal consumption and we thought these might be useful as a point of reference for the broader ecosystem.

We found the average prospecting hook is 24.60%. Obviously there are countless other factors at play here but hopefully these are useful benchmarks. And notably, higher hook rates = higher CTRs which is generally a good sign!

And if we wanted to take this even further and break it down by the classifications I mentioned earlier, it becomes even clearer. In this breakdown I included a Pearson Product-Moment Correlation Coefficient, which is a fancy way of measuring the strength of a linear relationship between two variables. Getting a 1 would be a perfectly linear correlation between the two variables, so especially with the D2C and Subscription brands we looked at, it’s pretty evident that optimizing your hook rate leads to increased performance.

I’m hesitant to recommend using these as benchmarks for your own ads. There are a ton of factors that could negate the need for extremely high Hook Rates, like the strength of your offer, the simplicity of your product, on-site CVR, etc. But I’m positive that using it as a measure of the effectiveness of your creative testing, will lead to increased performance.