The best way I could think of to share what I’m actually seeing in the Facebook/Instagram universe was to do an aggregate analysis of a handful of ad accounts based on very recent data. 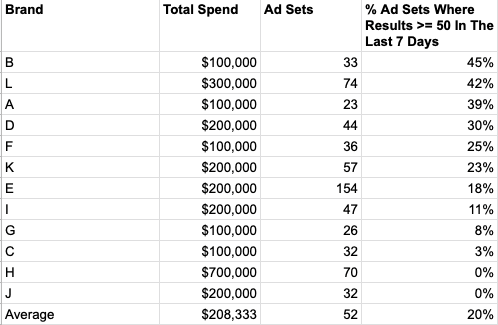 I’m a firm believer that the major platforms have almost entirely automated away the media buying process. Running campaigns effectively is primarily an exercise in following a simple set of rules, staying organized, and channeling as much energy as you can muster into creative, LP, and offer testing (which is all much easier said than done).

To this day, I regularly read in Facebook Groups/Blogs/Slack Channels/D2C Twitter/Linkedin anecdotes that start with: “What’s working now on FB is…”. Usually those anecdotes are focused on audience targeting (ex: “You must try this LAL audience stack”) and bidding (ex: “Cost Caps are working best right now”). Lately, there has been even more conjecture about how audience targeting has changed as a result of Apple’s iOS14.5 rollout (one common and intuitive position is that LAL targeting is less efficacious and so interest targeting is more important as a result).

The best way I could think of to share what I’m actually seeing in the Facebook/Instagram universe was to do an aggregate analysis of a handful of ad accounts based on very recent data. For each ad account, I wanted to see:

These accounts had many more ad sets in use than I anticipated (including Thesis clients) with 52 on average. To be clear, I'm not saying they had 52 ad sets active just that 52 ad sets had delivery during that seven day period. I think this is primarily because most advertisers use dedicated, broad targeted ad sets for their creative tests. That results in significant ad set bloat if you are regularly testing creative.

Notably, the average % of ad sets where optimization events were >= 50 was only 20%. Less than 50 optimization events per week does not guarantee an ad set will be stuck in Learning Limited but there is definitely a strong correlation there. That does not appear to be of grave concern for these accounts/brands. As an aside, I think the Learning Phase impact is real, but it does strike me as one of those areas where Facebook reps’ emphasis on the topic significantly outstrips its practical importance (Facebook Canvas is another one of those).

As with most things in life, the 80/20 generally applies here. The top 5 spending ad sets constitute 50% of total spend on average.

Nearly all of the advertisers in this sample are using Lowest Cost bidding with one exception.

Broad vs LAL vs Interest

Broad targeting accounted for 50% of total spend on average. There were a few accounts here that were notable holdouts that were extremely reliant on LAL or Interest targeting, but I think this data confirms what is now the industry mainline approach... lean into broad targeting and let the creative do most of the work.