Inspired by a client with whom we’ve seen delivery shift dramatically away from iOS and towards Android, we wanted to see if this was part of a broad shift on the platform. 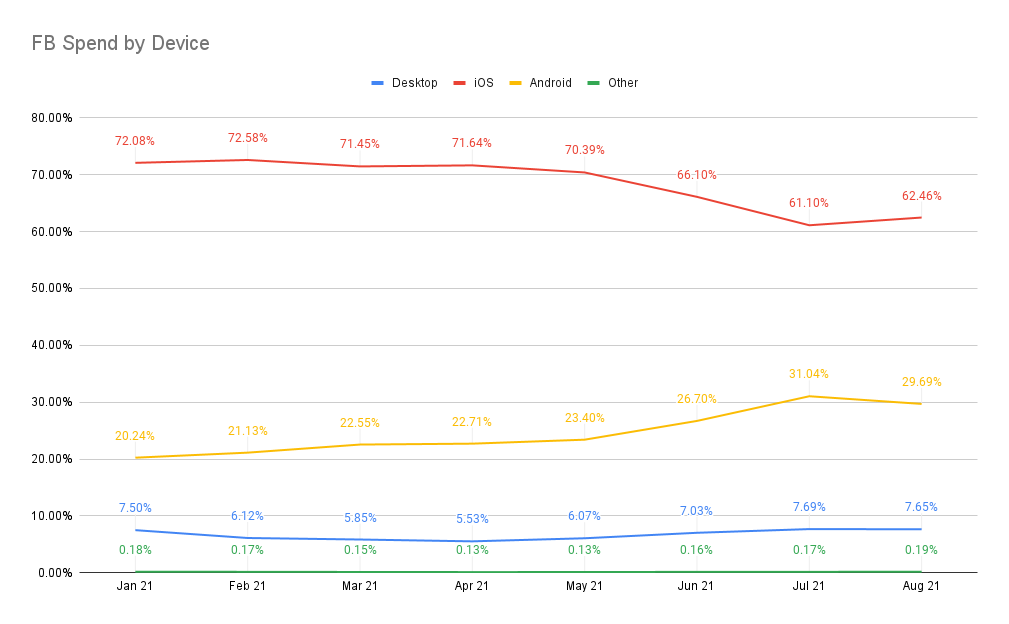 Now that we’re a few months into the new normal of a post iOS 14.5 world, we wanted to take a macro look at how the Facebook Ads platform has adjusted. Inspired by a client with whom we’ve seen delivery shift dramatically away from iOS and towards Android, we wanted to see if this was part of a broad shift on the platform.

Unsurprisingly, we do start to see a shift in June towards a more Android heavy spread between device types, however it’s not as dramatic as one might have expected given the reports of how many users have been opted out of tracking on iOS. Also, while it’s a very small increase overall, we do start to see iOS spend start to trend up in August. It’s possible that over time, as Facebook’s modeled attribution continues to improve, we might revert back to pre-iOS 14.5 levels.

We also have the data we used to create the above view broken down on a per brand level. In almost every case the overall trend is consistent, though there are a few exceptions.

In the graph below we looked at CTR by device and saw that iOS performance still looks solid relive to the other devices as it always has. While CTR doesn’t necessarily tell the entire story, it does indicate that iOS traffic will continue to play a massive role in campaign performance.

At Thesis we remain clearly opposed to segmenting ad sets by device type in spite of the trends documented above. Looking at how strong CTR on iOS devices are, it clear that there's still solid performance on those devices, even if attribution might not be as accurate. Which is why it's key to keep an eye on your blended metrics.