Estimating if Another Mobile App is Increasing, Maintaining, or Decreasing Ad Spend

Last week I was asked a very common question: "Do you happen to have any tool that tries to triangulate if {Mobile App X} is maintaining their ad spend?". But it's a surprisingly difficult one to answer! 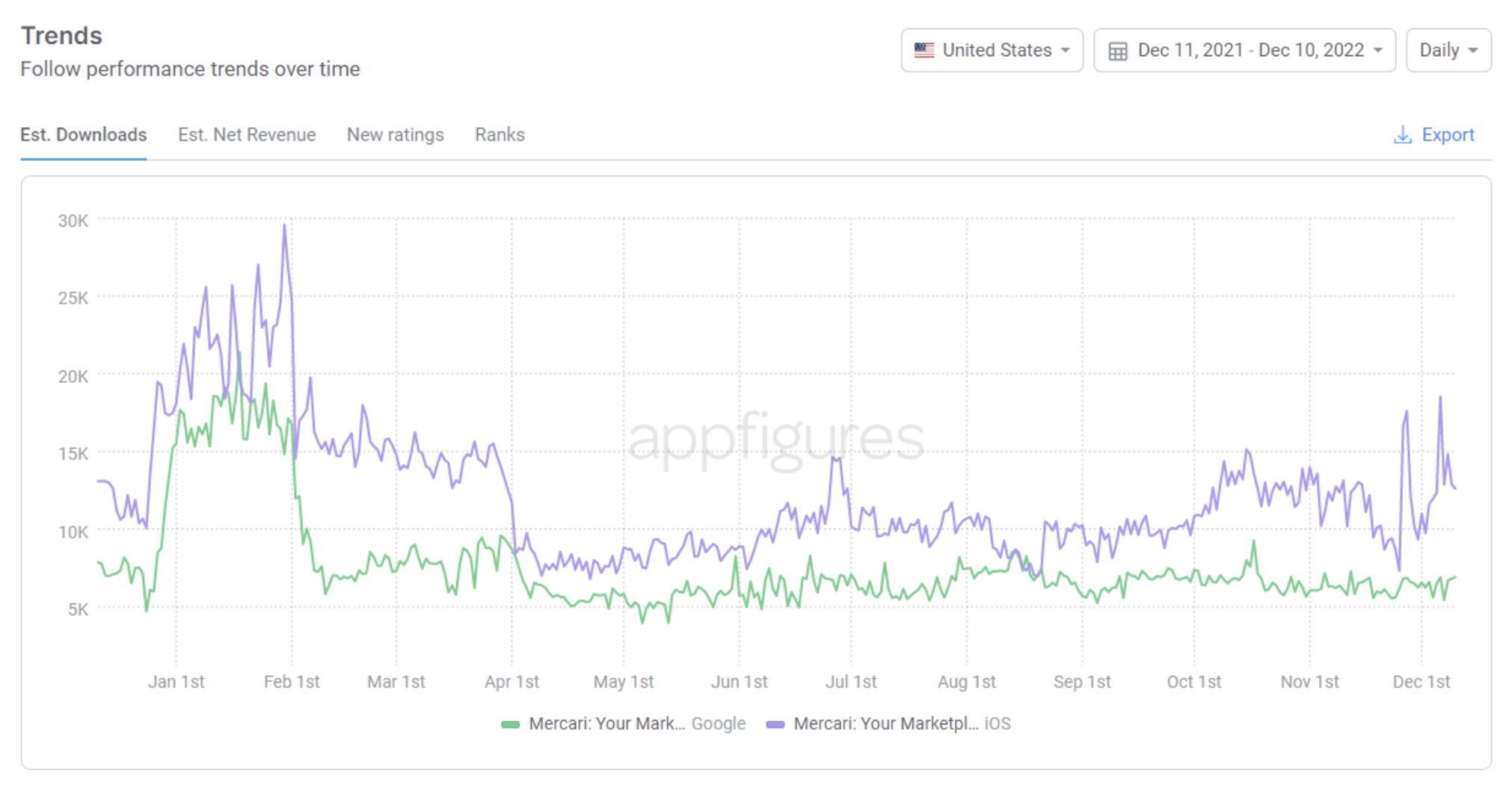 Last week I was asked a very common question:

Do you happen to have any tool that tries to triangulate if {Mobile App X} is maintaining their ad spend?

But it's a surprisingly difficult one to answer! I have not yet come across a truly reliable third-party estimate of spend for specific mobile app advertisers (if anyone HAS please let me know!).

Just to be sure, I posed this same question to my team at Thesis and on Eric Seufert's Mobile Dev Memo Slack, which is easily the best community for mobile growth around (save, of course, for MAU Vegas in person). In addition to Eric, two other industry titans weighed in: Thomas Petit + 🕺🏻 Matej Lancaric (not to mention some thumbs up from a number of other sharp folks, including my friend Shamanth M. Rao).

The general consensus was as follows:

For the purposes of demonstration, I'm going to pull the numbers for the Mercari app in the US.

In theory, Facebook's Ads Library reports on both Active and Inactive ads and includes the dates the ads were active.

According to the Ads Library. Mercari didn't launch anything between July 2020 and Oct 2022. That's obviously extremely unlikely. For Mercari, we see 10 launches in October, and 43 in November. Were I to repeat this exercise I wouldn't even bother pulling the Ads Library data.

We are power users of MobileAction's tools, including their Ad Intelligence module/plan. This is an example of the overview from a Creative Analysis page for an app:

I first pulled the total creatives/live creatives/ad publishers data by month for the iOS app. That suggests a significant ramp-down over the course of 2022:

And it looks the same for the Android app:

Mobile Action also features an Ad Network Distribution report (based on either the number of creatives or impressions). I pulled the data by month based on impressions. This is for the Mercari iOS app. This data doesn't really suggest much of a pullback.

And again this is for the Android app (notably a number of small channels fall out of the mix after Q1 according to Mobile Action):

Last but certainly not least I checked the regular old downloads data in both SensorTower and appfigures.

Above is combined iOS + Android downloads by day via SensorTower.

And here is the same via appfigures.

The Mobile Action creative + network data does seem to line up pretty neatly with the downloads by day from both ST and appfigures. The FB Ads Library data seemed really unreliable (especially in comparison to what Mobile Action was reporting).

In the end, it does seem like Mercari pulled back meaningfully after Q1!

PS: Huge thanks to Matej, Thomas, Eric, Shamanth and for their help and insights here!

Our friends at Nest Commerce recently published their Readout for Jan 2023. In it, they discuss a number of trends they see impacting D2C. Their graphs comparing 2021 and 2022 performance on Black Friday caught my eye as they saw a considerable improvement...

I'm regularly asked what a "normal" mobile conversion rate is in comparison to a site's desktop conversion rate. The reality, of course, is that there is no definitive answer to that unless. Nonetheless, we set out to at least establish a rule-of-thumb benchmark for that metric.

We’ve been working with a supplement brand in the US that launched in Q1 2020 for nearly 3 years now. Over that time they’ve relied heavily on paid Facebook ads for new customer acquisition. I was curious how their Facebook CACs & AOVs have trended over time...